Setting the course for innovation

In a dynamic marketplace like ours, you rely on people who are not just excellent at their job but also innovative and passionate about technology - people who make a difference every day. From the beginning, TXT founder Alvise Braga Illa has surrounded himself with high-caliber people who share his strategic vision and use their passion and ingenuity to bring that vision to life.

With an high school degree in Electronics, Enrico Magni is a seasoned entrepreneur.

He founded first Laserline (Car Alarms and Electronic components for Automotive), and in 2003 he acquired Lutech, an IT company, spin-off of a large industrial group. He drove the company growth (from 40m€ to 175 m€) through solid organic development and several acquisitions until 2017, when it was sold to One Equity Partner.

In March 2018, through Laserline SpA, he became the relative majority shareholder of TXT. In 2019 Enrico was appointed as Group CEO and in June 2020 he has been appointed as Chairman of TXT Group. 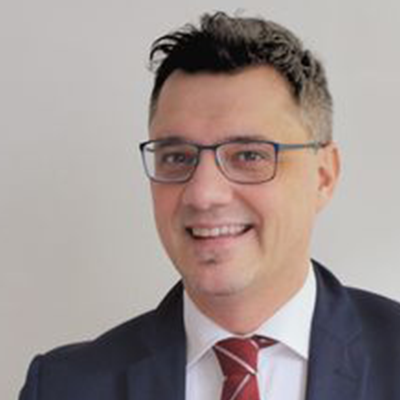 After a graduation in Software Engineering at Politecnico di Milano, Daniele Misani obtained an MSc in Electrical Engineering at the University of Illinois in Chicago and an Executive Education degree at the London Business School. He joined TXT in 2001 as a Software Engineer, since then holding different positions of growing responsibility from technical to sales and management departments.

In 2010, he became Key Account Manager for TXT’s largest aerospace customer, and in 2016 he was appointed Vice President, in charge of driving international business. In this role, he supported the PACE Gmbh integration process with the definition of the joint offering on a global scale. From 2019, Daniele Misani is TXT’s Executive Vice-President in charge of the Aerospace & Aviation division, a member of the Board of Directors and of the Group Executive Committee.

Member of The Order of Chartered Accountants and Auditors of Milan since 2003, Eugenio Forcinito has more than twenty-year experience in the Administration and Finance sector and a deep knowledge of managerial dynamics.

With innate leadership skills, Eugenio has always been focused on his professional career with a strong devotion to TXT and its growth and development in the last fifteen years.

Great time management skills, solid accounting expertise and a broad knowledge of national and international accounting principles, together with a strong focus on people management, allowed Eugenio to become the new Group CFO and a member of the Group Executive Committee in 2019.